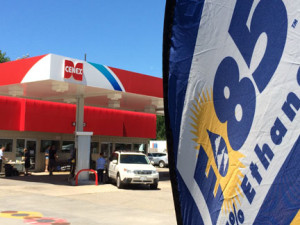 Why is ethanol in gasoline?

Ethanol was first added as a safer replacement to gasoline in the late 1990s when it was discovered that the oxygenate MTBE (methyl tert-butyl) was showing up in drinking water. Because of the clean air and renewable production benefits of ethanol, the Energy Policy Act of 2005 established the Renewable Fuel Standard (RFS) which requires levels of renewable fuels to be added to gasoline. Most stations today offer an E10, or 10 percent, blend in fuel that has an 87 octane rating.

How does ethanol change gasoline performance?

Ethanol has a higher octane number, providing higher compression ratios, which makes an engine run with more power. There is very little, if any, difference in gas mileage in using an E10 or E15 blend of fuel. Drivers who use E85 (an 85 percent blend of ethanol in gas) may see a 10-15 percent less fuel economy, but the savings from the lower price of E85 compared to regular gas offsets that difference in mileage.

Does ethanol hurt my vehicle’s engine?

No. Actually ethanol-blended fuel has several benefits to your engine. Ethanol-blended fuel helps keep your fuel system clean for better performance. It also helps prevent wintertime problems by acting as a gas-line antifreeze. Auto manufacturers have made design changes to vehicles to make them ethanol-compatible and take advantage of ethanol’s benefits. 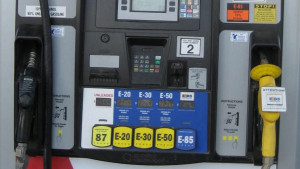 Which blend of ethanol can I use in my vehicle?

All vehicles can use E10 gasoline with a 10 percent blend of ethanol.

Two-thirds of new car owners’ manuals approve the use of E15 (15 percent ethanol, 85 percent gasoline). If your model is not approved by your automaker for E15 or higher, DO NOT use these higher blends of gasoline. Click here to see what autos allow E15 in their models.

Flex Fuel Vehicles (FFVs) can use all forms of gasoline up to E85 (85 percent ethanol and 15 percent gasoline). FFVs have special labels on their gas caps making them aware of this. You can see what models are FFVs here.

Can I use ethanol in my motorcycle, snowmobile or boat motor?

Absolutely, but only up to an E10 blend. Gasoline containing up to 10 percent ethanol is approved by all engine warranties. In fact, due to rising concerns about emissions from snowmobiles in some recreation and wilderness areas, the use of ethanol-blended fuel is required to protect air quality.

Most marine manufacturers have allowed the use of E10 for decades but may specify certain precautionary actions such as a water separator filter. In fact, ethanol is the oxygenate of choice in some water-recreation areas because of its clean air and clean water benefits. Read more about E10 use in boat motors from the Boat Owners Association of U.S.

It should be noted that that E15 has not been widely approved for use in motorcycle, marine or small engines. 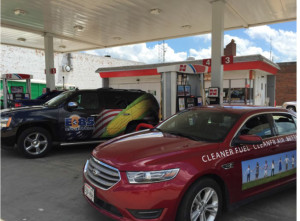 How is ethanol good for air quality?

Ethanol burns cleaner than gasoline. Grain ethanol decreases greenhouse gas emissions by up to 57 percent compared to gasoline. In 2013, the production and use of more than 13 billion gallons of ethanol in the U.S. reduced greenhouse gas emissions by 38 million metric tons, the equivalent of removing roughly 8 million automobiles from the road. The American Lung Association recognizes when fueled with E85, Flex Fuel Vehicles (FFVs) are a Clean Air Choice®.

No. Keep in mind the type of corn used for ethanol is called “No. 2 Yellow” corn, and should not be mistaken for sweet corn, or the canned or frozen corn you buy in the store. About three percent of this field corn goes directly into food products as corn meal, corn oil, corn syrup or corn starch.

Ethanol production just uses the starch from the corn. One-third of every bushel of corn used in ethanol production is returned to the food chain in the form of animal feed — referred to as distiller’s grains.